High-quality software articles in addition to exclusive explanations and lessons !!

The cheapest Samsung mobile phone with a dual camera and a large battery!

The new Samsung Galaxy M01s is one of the cheapest phones that make up the Samsung mobile phone catalog, however the device that the company presented on Thursday inherits some of the distinct details of the rest of the “Galaxy M” and “Galaxy A” series models. The phone has a distinctive modern design. And the big battery and dual camera at the back. 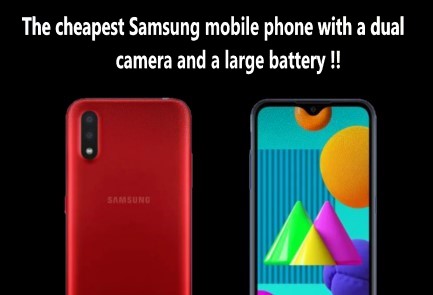 After unveiling the “Galaxy A01” and “Galaxy M01” phone, which are two of the latest low-cost Android company Hovt, and here the company is now announcing a new version of the “M01” series phones with “Galaxy M01s”

At the moment, the new phone has been announced in India, and Samsung has not officially announced the date of its release in all countries …

We reach here to conclude today’s topic. We hope that this news will appeal to you, and if you like today’s topic, do not forget to share the topic with your friends, in appreciation of our effort 😊